I lost my password and then I found it. Now I can shout from the rooftops about the new and amazing board game coming out next year. It is called MourneQuest and is by the wonderful guys at BackSpindle Games David Brashaw and Leo Boyd. With the talented John Farrelly and Alan Perry designing the characters.
To say I am happy about this is a gross understatement. It is a fantastic step in the fantasy world of MourneQuest.
CHECK OUT THE LINK
https://www.backspindlegames.com/go/mournequest/ 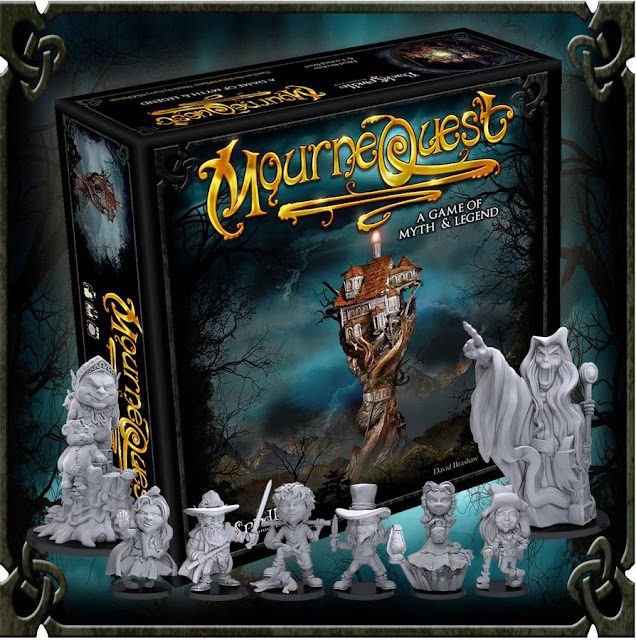 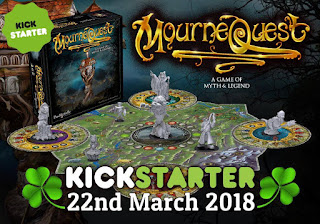 Hi everyone. A message from Backspindle Games
We are delighted to announce that our much anticipated 2-4 player Irish fantasy boardgame, MourneQuest will be going LIVE on Kickstarter.comon Thursday 22 March 2018.
We really hope you love the game and how we have brought the characters and monsters of Garry McElherron's mythical Ireland to life through illustrations and beautifully sculpted miniatures.
"We'd love it if you could like and share this post."
Thank you for enjoying our games!

It's been a very long time since I blogged anything. I just got out of the habit. Facebook came along and took that place I think. I just wanted to update you on the fact that a new book is out. It's called Mournequest, The Devil's Coachroad. The book takes place a number of hours after the last one left off.Another exciting thing is the development of the board game by BackSpindle games. The collaboration with this talented bunch should bring forth an incredible game.﻿
https://www.amazon.co.uk/gp/aw/d/1326769669/ref=mp_s_a_1_1?ie=UTF8&qid=1486924693&sr=8-1&pi=AC_SX236_SY340_QL65&keywords=the+devils+coachroad&dpPl=1&dpID=51HsoSyDVGL&ref=plSrch 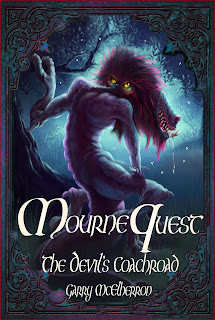 The wee man is alive and well 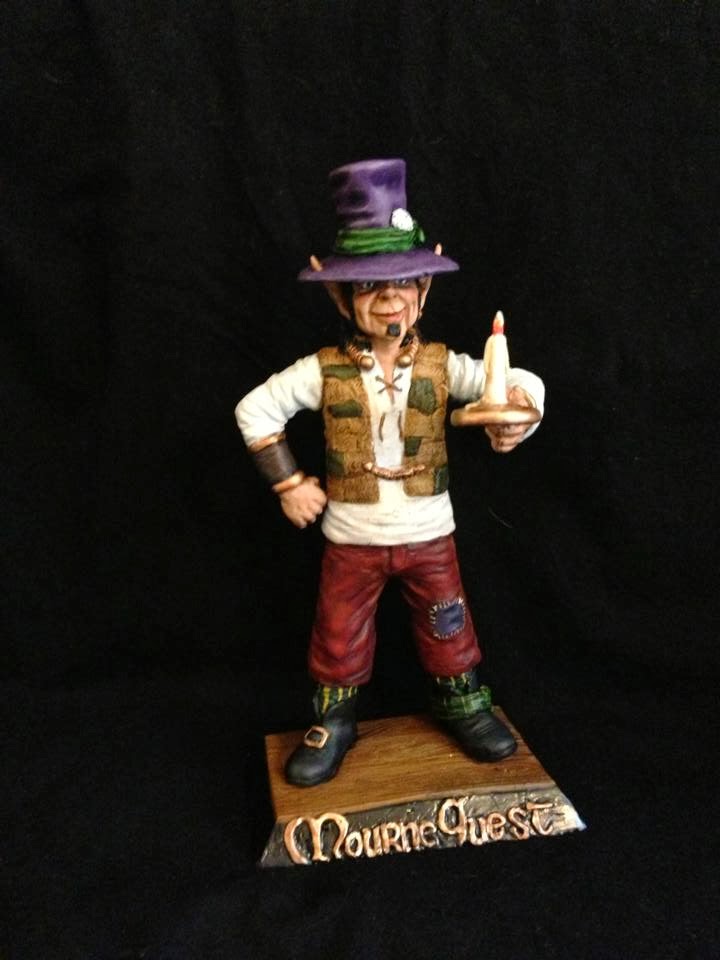 Cobs has leapt into the real world. He has literally jumped off the page and into the real world. Thanks to the talents of John Farrelly, artist extraordinare and Alan Perry for his amazing 3D rendering, then the craftsmanship of Philip Hynes who sculpted the wee fella and finally the Hairy Painter, Ric who breathed the final breath of life into him.
It always astounds me when I look at the list of names that roll up onto the screen at the end of a movie, but it took 5 people to put this together.

What do you think?
Posted by Unknown at 15:02 No comments: 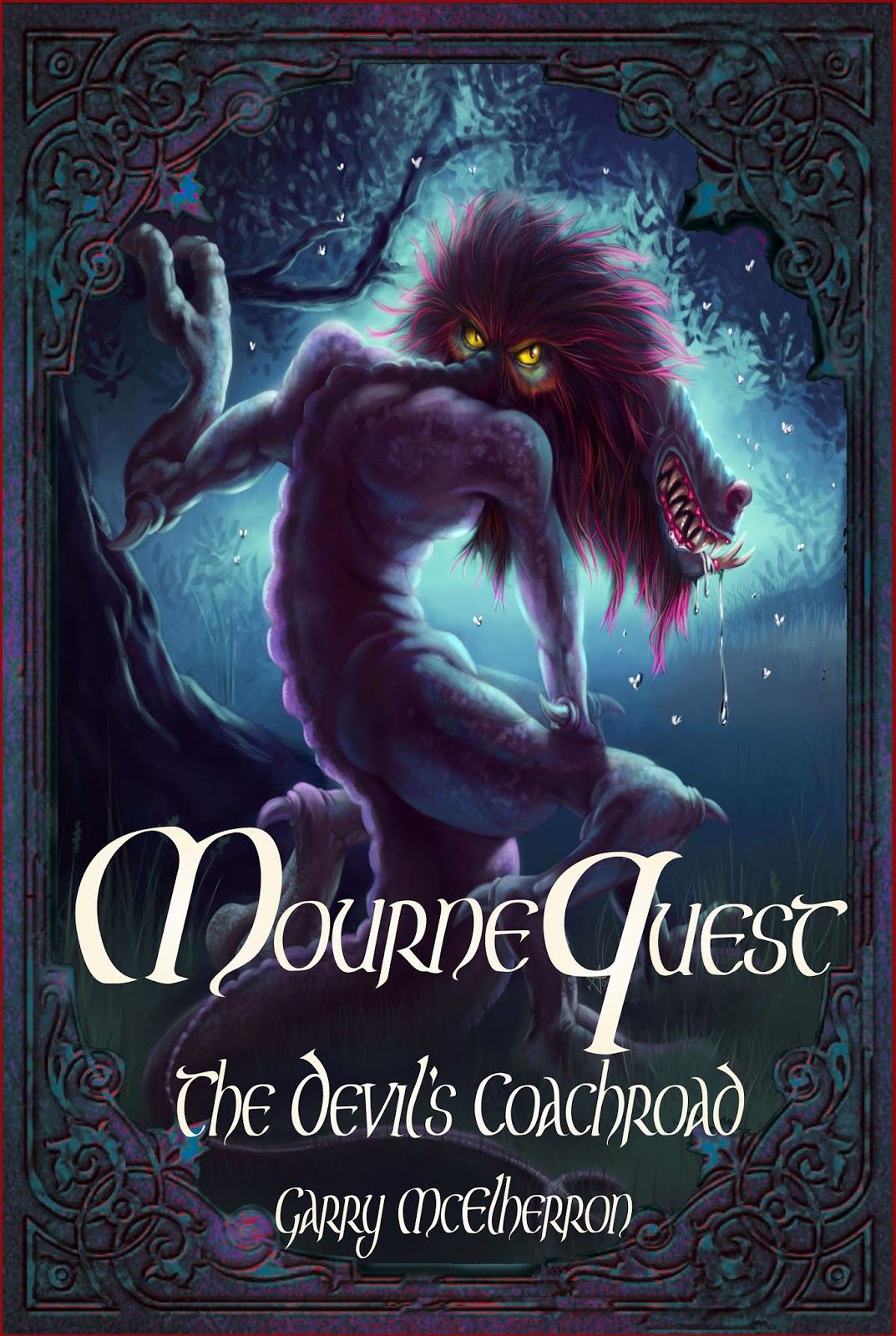 Just when you thought it was all over another one rears its ugly head. And this one has an ugly head, the head of a Shimnavore no less.
This is the cover of book 2 that will hopefully be gracing the cyber shelves in the near future and the physical shelves of those amazing stores that are discerning enough.
Book 2 starts later in the day from where book 1 left off. This continues to tell the tale of Jack Turner and Cobs but in a whole new way. The two help each other out without physically coming into contact with one another even though they travel into the hills again.
New characters and old ones reemerge. Loose ends are tied up.
This story is darker than the first and the stakes seem much higher.

I would love any feedback on book 1 and what you hope to see in this new installment.

P.S there are further developments to broaden the MourneQuest world.
Watch this space

Get on with it! 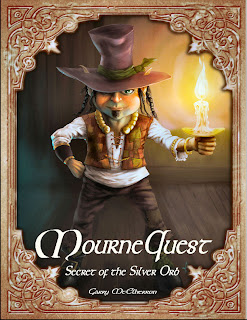 As with all things that come to an end there has to be something new. That is the case with finishing this project. I now had a manuscript. That was the end of something, a finished piece of work, something that took a few years to get right. When I say get right, it'll never be right, it's abandonded. Every time I read a sentence I know it could be written 10 different ways but now when I read other, and immensely more successful authors, I can improve on their prose too. It is a matter of conceit mixed with pride what a writer writes; to work on a sentence for an age, to hone it to perfection, then the week after you re-read and trash it.

I decided after much deliberation to send the manuscript to all the publishers I so admired and waited until one by one the rejection letters arrived. The best one was Penguin Ireland and it was then that I decided, after 6 months to go the independent route.... THE DREADED PATH TO SELF-PUBLICATION.....

LULU allowed free publication on a print on demand (POD) basis. This allowed me the freedom to test the market and to go online and sell e-books. A whole new world opened up to me and the more I read about it all the more intrigued I became. It is a steep learning curve, one that allows you to see every angle. Artwork for the cover, layout, chapter settings, editing, copyright issues, branding. I'm beginning to bore myself...
Then one has to learn how to format and to e-pub. It was a nightmare. What I forwarded to the printers didn't look anything like the layout I expected. The amazing artwork that John Farrelly and Alan Perry had worked on morphed into an elongated blog...but I perservered, I climbed that mountain, I swam that shark-infested sea.
Truth be told I typed for hours until I got what I wanted. When I say hours I should shout weeks.


Now I had an online copy of my book I clicked print. Print on demand is amazing, the book is only produced when demanded. I know that sounds obvious but to be able to print one book at a time is a REVOLUTION.
I printed my first copy and several more until I was happy with the final product. 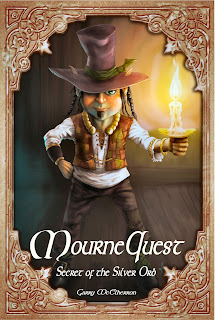